The DTS Alumni Wall of Fame is the most prestigious recognition of a DTS alumnus. The key criteria are having given exceptional service to DTS through direct work with the Actives or Alumni, and/or their community and/or the World. These accomplishments could have been achieved through their professional work and/or volunteering. 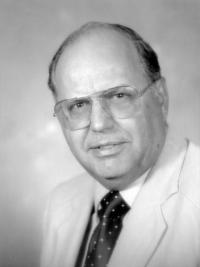 Alton Block’s career spanned several decades working across a diverse cross section of the agricultural sector. His work promoted agriculture not only in Wisconsin, but around the world.

Alton pledged Delta Theta Sigma in the fall of 1946 and was an Active member for 2 years. He graduated with a B.S. in Dairy Science with a minor in journalism in 1948. He went on to complete his M.S. degree in animal genetics in 1953.

Throughout his career, Block achieved many “firsts.” He became the first Dairy Extension Agent for Dodge County in 1949. In 1951 Block began as a Field Representative for Badger Breeders Cooperative, subsequently assuming the position of Sire Analyst. Later he became Director of Sire Procurement, initiating a mating program that became an industry-wide standard.

From 1965 to 1970 Alton served as General Manager for East Central Breeders Cooperative. Here he revitalized the firm with an aggressive marketing program that reversed a three-year downward trend in sales. One of the highlights of this position was serving on Governor Warren Knowle’s trade mission to South America.

In the early 1970’s, Alton served as General Manager for Tri-State Breeders Cooperative, where he initiated a growth program that incorporated many changes and firsts for the industry, including the first fully coordinated professional advertising program in the industry, a program that garnered national awards.

Alton was a Director of World Dairy Expo, serving on the very first Board of Directors. He was one of the pioneers who initiated this world class event that continues to this day.

In 1974 Block changed gears and began work as an associate for Consultant’s International, LTD, a management and marketing consulting firm. Projects Block was involved with include a massive study of the U.S. turkey industry, a customer relations program for the Steiger tractor company, and an international study of Triticale, the first man made grain.

Alton was actively involved in DTS alumni events, seldom missing an annual alumni Board meeting. He was an early participant in the DTS Mature Alumni group and served as the group’s treasurer for many years. He was also a member of several host committees that planned annual group events.

Ed Jesse was a prominent UW-Madison professor and UW-Extension specialist and administrator. His research and extension focused primarily on dairy marketing issues of importance to Wisconsin dairy farmers and processors.

Ed began his professional career with the Economic Research Service of USDA, stationed at various times over a 14-year span in Washington DC, the University of California, Davis, and the University of Wisconsin-Madison. His research covered a wide range of issues, most involving the production and marketing of fruits, vegetables, and specially crops and the related role of cooperatives and federal marketing orders.

In 1984, Ed left federal government service to accept a position as professor of Agricultural Economics at UW-Madison, a position he held until his retirement in 2009. His academic assignment involved extension and research, primarily on dairy marketing and policy, and teaching courses in agricultural marketing and agricultural policy. His research agenda was largely motivated by the effects of federal dairy policies and other government regulations on Wisconsin dairy farmers. He was frequently asked to testify at legislative and Federal Milk Marketing Order hearings. He initiated two widely disseminated periodicals: Marketing and Policy Briefing Papers were periodically distributed mainly to county extension faculty, providing information on contemporary issues to assist them in their work with farmers and agribusiness clients and Status of Wisconsin Agriculture, an annual year-end summary and forecast of state agricultural conditions with a mailing list numbering more than a thousand.

Ed served as chair of the Department of Agricultural Economics from 1986-1991. In 1992, he accepted the position of Associate Dean for Extension and Outreach in CALS, responsible for providing administrative support and budget oversight for the 100+ Cooperative Extension specialists housed in most departments in the college and several free-standing Extension units. In 1998, the position was expanded to include providing statewide leadership for Cooperative Extension programs in agriculture and natural resources.

In recognition of his service, Ed was honored by receipt of the Lifetime Achievement Award from the Cooperative Extension Division of UW-Extension in 2007 and the Distinguished Service Award from the UW-Madison College of Agricultural and Life Sciences in 2011.

Ed’s involvement with the DTS Alumni Board began in the early 80’s, when he was Board treasurer for several years. His most notable action in that position was his work to reduce the mortgage on the DTS house in the mid-80s when real estate mortgage rates rose to nearly 15 percent. Ed was an active “Mature Alumni,” serving as treasurer of the informal organization from 2010 to 2019 and, with his wife, Linda, as a member of two host committees. 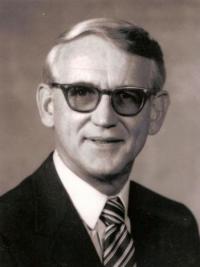 Dave conducted research on animal behavior, corrective mating for type traits, and type classification. But his strong suit was teaching and advising students. For many years he taught the large introductory class in Dairy and Animal Science and a popular course in dairy breeds and families. Later he taught a large-enrollment course in Dairy Herd Management. He was a long-time advisor for the Saddle and Sirloin Club, and he had hundreds of student advisees. During his 33 years of teaching, it is documented that he taught 10,228 students!

Dave received several awards for his outstanding commitment to teaching. These included the campus wide Kiekhofer Teaching award (1967), the CALS Gamma Sigma Delta teaching award (1970), and the American Dairy Science Association teaching award (1981). He served as chairman of the CALS Curriculum and Instruction Committee for 26 years.

Besides these accolades for his teaching, Dave was honored for his broader contributions to CALS and the dairy industry in general. These included the Atwood Distinguished Professor in CALS (1980), World Dairy Expo Industry person of the year (2001), and the Farm and Industry Short Course Alumni Service to Agriculture Award (1997.

In 2014, Dave was chosen by CALS to receive the prestigious CALS Distinguished Service Award, arguably, the highest honor bestowed on retired members of the faculty by the College. The award notes: “An inspirational educator with a passion for dairy cows; an unselfish and frequent host to visitors from around the world; an enthusiastic guide whose patience and inspiration motivates others with a love for the dairy industry; an advisor dedicated to enhancing the lives of undergraduate students both in the classroom and with out-of-classroom, often international experiences.”

This interest in people of other nations continued for a lifetime of travel and entertaining internationals in their home. Dave and Joan were both instrumental in the recruitment for and training of participants in the International Farm Youth Exchange (IFYE) program Dave was a formal and informal advisor to many DTS alumni who hold him in high regard. He had a kind, humble, always optimistic, often humorous approach to dealing with people. His contributions to DTS were on many fronts. He was there for parties, summer picnics, Mature Alumni gatherings, business meetings, dinners. and work projects. He made many generous donations to the DTS Educational Foundation. His will funded the creation of UW Foundation endowment fund named in his honor for scholarships for prospective DTS members. He served as president of the Alumni board and was a key player in the purchase and move to the current house at 252 Langdon. 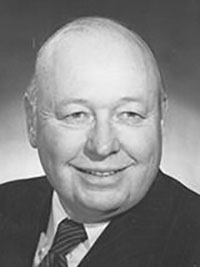 Bob Spitzer is one of our most widely recognized and honored alumni. He was a business leader, a public service leader, an educational leader, and a devoted supporter of our fraternity.

Bob pledged DTS in 1940 and received his B.S. Degree in 1943. He went on to obtain MS and PhD degrees in animal nutrition, biochemistry and medical physiology from what is now UW-Madison.

Over a 28-year span, Bob served as Director of Research, Executive Vice President, President and CEO, and chairman of the board for Murphy Products, a prominent agribusiness firm headquartered in Burlington, Wisconsin. While Bob was providing leadership for Murphy, he was chosen as President of the American Feed Manufacturer’s Association, one of the largest U.S. agricultural trade associations. He also served as a member of the Committee on Animal Research of the National Academy of Sciences and held the position of President of the Wisconsin Manufacturer’s Association.

After retiring from Murphy Products Company, Dr. Spitzer was appointed by President Gerald Ford to serve as Coordinator of the U.S. State Department’s Food for Peace Program, an effort that benefitted several million malnourished people in 50 countries. He participated in the World Food Program in Rome as a citizen advisor and as a delegate of the United States.

Later in his career, Bob helped persuade Kikkoman Corporation to build its first U.S. soy sauce processing plant in Walworth and was named Director and Senior Mentor of Kikkoman. That proved to be a boon to soybean growers in south central and southeastern Wisconsin.

Bob was an educator and strong supporter of higher education. In 1968 he established the Spitzer Excellence in Teaching Award, granted annually by the UW-Madison College of Agriculture and Life Sciences to an outstanding educator selected by the College. In 2010, Dr. Spitzer received the Wisconsin Historical Society’s Charles Van Hise Award for Distinction in Education.

Bob’s crowning achievement in higher education was serving as the third President of the Milwaukee School of Engineering (MSOE) for 14 years. Under his leadership, MSOE invested in new facilities and new ways to deliver educational programs off-campus. MSOE also established new undergraduate degree programs in architectural, biomedical, computer and industrial engineering, business and computer science, mechanical engineering technology, and technical communication, as well as a graduate degree program in engineering and an Air Force ROTC program. John Walz, MSOE president at the time of Bob’s death in 2019, noted that “Bob Spitzer was a true friend and advisor. His energy and positive spirit were infectious, and his passion for MSOE knew no bounds.”

Bob was a true friend and strong supporter of DTS. He was filled with ideas and had a remarkable ability to motivate others to embrace and expand on them. One of his recent ideas was to create a scholarship fund within the UW Foundation to not only provide financial support for undergraduates majoring in agriculture but also to expand membership in DTS. He spearheaded a planning process involving several alumni that resulted in the establishment of an endowment fund in 2016. Bob was an early donor and made a significant personal donation. The UW Foundation DTS Scholarship fund was renamed the DTS Robert R. Spitzer Memorial Scholarship Fund in his memory following Bob’s death.

Another of Bob’s ideas resulted in the creation of the DTS Mature Alumni group. He invited several of his DTS contemporaries to a picnic at his home in 1991. A good time was had by all, and the picnic turned into an annual reunion that continues with regular attendance of more than 100 alumni, spouses and guests. The reunion rotates across the state with local host committees arranging the program and tours featuring agriculture in their area.